Before embarking on my daily trip to the gym yesterday, I grabbed my shaker cup, filled it with eight ounces of cold water and mixed in some NOxplode. As I sat waiting for the “madness” to begin, I decided to kill some time on twitter, and when I opened it up, I immediately saw this tweet. 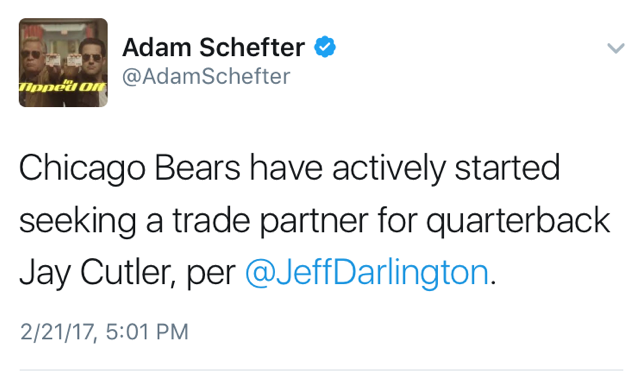 For a lot of us, this was something we knew was going to happen. It was just a matter of time. Even though it was something we anticipated, this was still a little bit of surprise. When I watched Jay Cutler in the few games he played this past season, it became clear to me that I was probably watching his final moments in navy and orange.
Even knowing that seeing it actually happen was still difficult to watch. I decided to log off twitter, throw on Future’s new album and go for a run.
Somewhere between mile three and four, I found myself thinking about Cutler again. Maybe it’s the way I choose to look at life, but when I reminisce about him, it’s mostly the “good stuff.” Let me note, I am not blind to his flaws. In fact, I was at his first game as a Bear. It was in Green Bay. I recall wearing my Lance Briggs jersey, as I watched him throw four picks in a disappointing season opener. Trust me, I’m all too familiar with his drawbacks. However …

For me, the good far outweighs the bad.

I remember Cutler lowering his shoulder countless times, and running over defenders. I remember yelling at my TV: “Jesus, JAY!!! Slide, be smart!” while at the same time absolutely loving it. I remember him getting in defender’s faces after the many terrible offensive lines he endured let him down … again.
And what about the comebacks? How many times did Cutler single-handily snatch victory from the jaws of defeat?
I remember the (many) deep balls. I remember him gutting it out and playing through injuries. I also remember two Thanksgivings ago when Cutler beat the Packers in the National spotlight, which spoiled the Packers retiring Farve’s Jersey.
Of course, when looking back on the Cutler era, there will be some bad mixed in with the good. That’s just Cutler. He had a way of making you want to buy a #6 jersey. Then within moments, having you in need of some replacement remotes.

Cutler was a lot of things.

Ultimately, I think he was just unlucky. He played on some teams with “skill” players who didn’t really belong on an NFL roster. He played behind offensive lines where he was lucky to be able to move under his own power after the final whistle blew. He also played under what I consider to be some historically bad coaching.
Cutler didn’t always do himself any favors when it came to the press and some of his interactions, but the Bears didn’t do him a whole heck of a lot in terms of giving him a solid chance to win either.
But guess what?

Even with all that, whoever is under center next year is going to find himself looking up to Cutler in the Bears’ record books. Cutler sits atop when it comes to quarterbacks who’ve played for Chicago.
After I finished my fifth mile, I decided to log onto twitter again and see if there were any further developments. 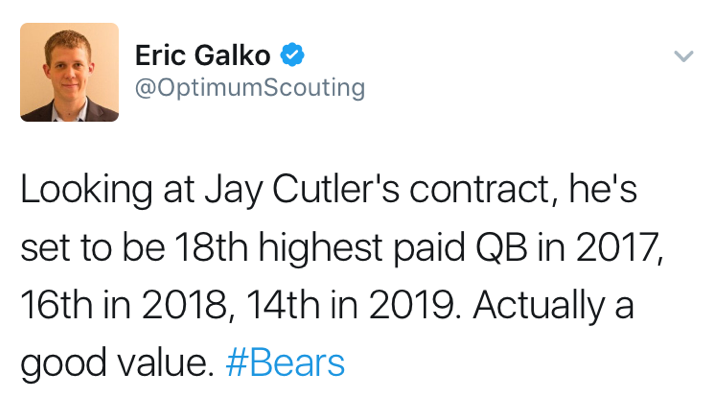 When you look at the reality of the situation, its kind of hard to predict what, if anything, the Bears can get for Cutler.
On one hand, who is going to trade for a QB who you can only assume is going to be released? On the other hand, Cutler’s contract is incredibly affordable for a starting caliber quarterback in a league starving for solid play at the position. So while I don’t know if Pace is going to be able to pull off a trade, you can put me in the camp of people who won’t be surprised if it happens.
As I sit here, reflecting on Cutty’s time in Chicago, I can’t help but wonder what could have been.

I don’t know if it’s the right time to move on. At best — I am conflicted.
However, it now appears to be a certainty that the Bears have decided to part ways. That is the reality and now we have to deal with it. I hope it ends up being the right decision. We lived through some pretty terrible quarterback play before Cutler, so to say I am nervous about life after #6 is an understatement.

I wish you the absolute best, Jay.

Thank you for all the ups, and I forgive you for all the downs. Thank you for the 154 touchdowns. I forgive you for every back foot, head-scratching interception. Thank you for the comebacks, the deep shots, the jokes, the honesty and always taking the high road. Thank you for your leadership and for representing the greatest franchise in the NFL in an admirable way.
Chicago was not always fair to you, but I take solace in the fact that you couldn’t care less. The media chastised you for not smiling more. I’m telling you that the majority of us true Bears couldn’t care less about that, and for what it’s worth, know that you smiled plenty.
I would like to apologize on behalf of everyone who placed all of the blame on you for the disappointing seasons. Those who paid attention, know that putting the bad years solely on your shoulders would be an egregious lapse in judgment.
I am unsure how Bears fans will remember you years down the road, but this is how I will.