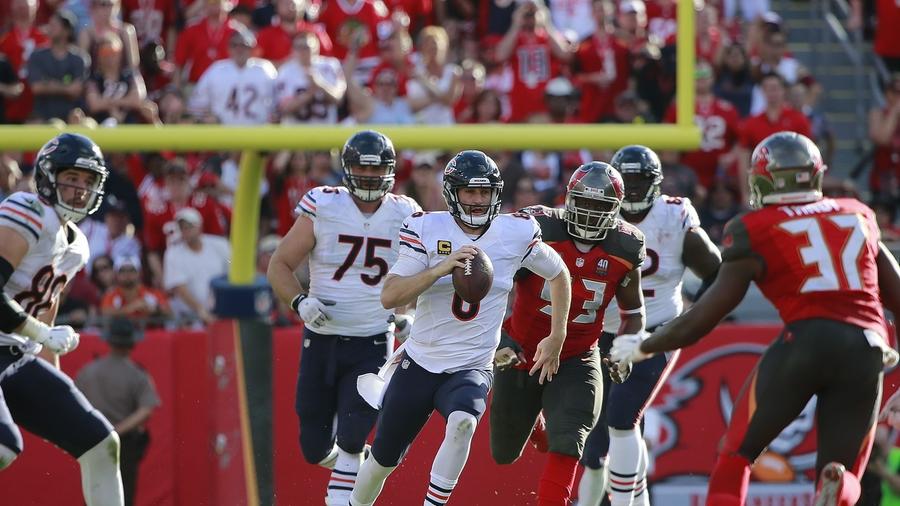 First things first, congrats are in order! You survived the bye week.
If you are like me, it is the worst week of the football season. No matter what the record is, when that horrible Sunday comes around and I am not able to watch my team, it’s depressing. Perhaps even more impressive, you have survived the first half of this season.
If you had told me the Bears would be 2-6 at this point in the season I would have said you were an idiot. I would have pointed to the influx of talent, the John Fox 2nd year turn-around and the fact that it’s the second year in the system and assured you 4-4 would have been the basement.
However, as is often the case with sports, it has left us scratching our heads and yelling at the TV. The Bears spent the first half of the season keeping their training and medical staff busy. Jay Cutler went down with a thumb injury, Eddie Goldman ended up with a severe ankle sprain and Kevin White injured his shin again just to name a few. We have had shuffling along our offensive line, a myriad of nagging injuries that have limited the effectiveness of high-impact players and even a Matt Barkley sighting.

That being said, there have been plenty of positives as well.

After a convincing win in Jay Cutler’s return game over the heavily favored Vikings on the national stage, I have been reminded that there are good things going on at Halas Hall as well. And since you are reading this, still consuming content on the beloved, I imagine you feel the same. While I have had several depressing Monday mornings this season, I also believe we will all have great Monday mornings in the near future. Let’s take a look at a few of the positives for the second half of 2016.

1. Jay Cutler is back

Say what you want about Jay Cutler but the Bears are significantly better with 6 under center.
Jay Cutler hurt his thumb on his throwing hand in the first game of the season. While he tried to give it a go for the second game, that only made the situation worse. So up until the Vikings game we hadn’t seen what this offense could be. During the time Brian Hoyer was at the helm the internet was chock full of opinions. I saw just as much fawning over Brian Hoyer as I saw vitriol. There were people saying Brian Hoyer should have been the starter all along while others spent their time disparaging his work and saying his was terrible etc.
For me, none of it was really warranted.
You want to know what Brian Hoyer is? Brian Hoyer is one of the best backup quarterbacks in the league.
Nothing more nothing less. His job was to come in and try to keep the ship afloat should Jay (inevitably) miss a few games. Guess what, he did a fine job of that. But he also isn’t the answer. When you look at the difference between Jay and Brian you might point out athleticism and pocket presence as the main differentiators. And while they are important, the big difference to me is how much of the field they each require you to defend.
The fact of the matter is Jay keeps defenses honest.
He can stand in the pocket to deliver, roll out to hit a receiver or running back on a broken play or he can take the top off of the defense and throw a 50-yard pass to Alshon Jeffrey. Plain and simple Jay forces the defense to defend the entire field, a much steeper task. Also, for my money he is much more entertaining, which is why we watch these games.

2. The remainder of the season is full of winnable games

When I open Bears app on my iPhone and I look at the upcoming schedule, it’s hard not to smile.
Why am I smiling?
Because I see winnable games.
We are catching the Bucs, who aren’t very good to begin with, at a great time when they could be missing two of their most important pieces. The Giants, at 5-3 don’t scare me. The Titans, beatable. The 49ers, that shouldn’t be close. The Redskins, also beatable. The rest of the games are against the NFC North. Now we have lost games this season I considered to be winnable.
But with Cutler back, the offensive line coming together and the Bears starting to get healthier all over, it almost feels like a whole new season.

3. The future is bright

Now I am of the opinion that you really can’t judge a draft until about three years down the road. Until then it’s premature. However, if you watch the Bears play every week like I do and don’t get excited about the 2016 draft class, I am not sure what you are looking at.
Leonard Floyd has 3 sacks, a forced fumble and a touchdown in the last two games. Cody Whitehair looks like he will be the Bears starting Center for the next decade and the Buccaneer defense might want to go ahead and schedule massages the for next Monday. You add Bullard to that list and how can you not be excited. When you looked at the Trestman era Bears (sorry), you saw a lot players who were up there in age.
When I look at the roster today, I see a ton of youth. I see youth gaining valuable experience and making an impact every single week.

Well, there you have it.

I have seen some fans say they would like the Bears to tank. They feel like Bears are going to go out there and win just enough games to put their favorite college player out of reach. My response to that is that if that high pick player comes into an organization that has become comfortable with playing losing football, it’s not going to mean a lot.
So, my advice is to enjoy the next eight games.
I will be watching Cam Meredith, Jordan Howard, Leonard Floyd and Jonathan Bullard develop. I will be watching Alshon Jeffrey earn every cent of his upcoming contract by catching Jay Cutler jump balls. And I will be watching a defense that looks like it going to be a bully for years to come. Bear Down!

Did you miss our latest podcast episode?

Previous Post: « Fan Vote: Who is the Most Valuable Bear at the Bye?
Next Post: Has Pernell McPhee Gone Overlooked in His Return? »