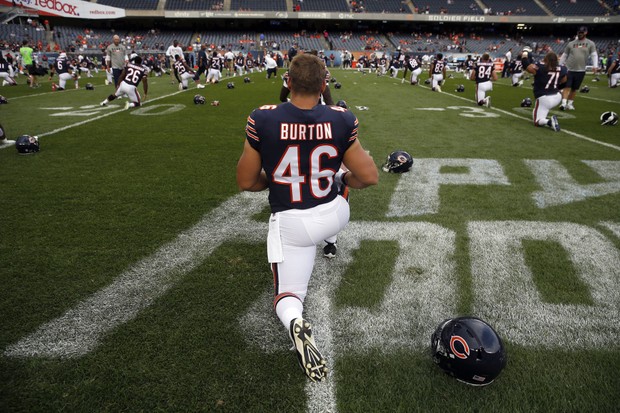 When fullbacks Michael Burton or Freddie Stevenson are on the field the Bears’ offense gets moving.
For both Burton and Stevenson their primary job is to burst out of their three-point stance, find their gap and obliterate the opposing defensive player to create a lane for their running back.
Seems like a job that isn’t very rewarding but when Jordan Howard, Ka’Deem Carey, Benny Cunningham, Tarik Cohen or Josh Rounds make it past the first line of defenders untouched, the group can’t thank their fullbacks enough.
In last Saturday’s 24-23 win against the Cardinals, the fullbacks were on the field 11 of 60 plays. But in those 11 plays, the offense didn’t gain positive yards only one time and that was due to rookie tight end Adam Shaheen being penalized for a holding call, that negated a 16-yard run by Ka’Deem Carey.
For the Bears’ first offensive possession against the Cardinals, starting quarterback Mike Glennon and the offense started on their own 42-yard line, thanks to a Cunningham kick return. But the offense stalled after Cohen’s 16-yard run on first down then lost six total yards on back-to-back plays and picked up only three yards on a third-and-16 … the Bears punted.
On the Bears’ second possession, Burton was on the field for three of the eight plays, which all resulted in positive yards for the offense and ended that drive with a 42-yard field goal by Connor Barth.

In the clip below, Burton gets just enough of outside linebacker Chandler Jones to help spring Cohen for a 16-yard gain.

When Stevenson was in with three minutes left in the fourth quarter, he helped lead the Bears to their second offensive touchdown on the night. The rookie from Florida State had one catch for 17 yards and was the lead block for Rounds’ two-yard pickup on the five-play drive, that ended with a Cunningham receiving touchdown.
On this play, the Cardinals’ defenders over pursue with Stevenson and Rounds both heading right, but Stevenson cuts back to the left for a wide open pass from Mitch Trubisky.

In the week one loss to the Broncos, the fullbacks were on the field 13 of 73 plays. Burton was on for seven and Stevenson six. But out of those 13 plays, the offense only had one negative run – a loss of one yard.
Burton was also flagged once for holding on a passing play and the three other times the Bears threw the ball, two were incomplete. On one of the passing plays, Burton initially blocked then he shoved off his defender and was wide open on the out route, but Mike Glennon threw an inaccurate pass to Deonte Thompson instead.

Despite the few negative plays, the overall results from the “fullback experiment” is positive.

In each of the Bears two preseason games, the offense has eclipsed 100 rushing yards, 173 against the Broncos and 102 against the Cardinals.
There is no question the Bears will rely heavily on their run game this season, but realistically if either Burton or Stevenson makes the roster, there will only be room for one of them.
For the remaining two preseason games head coach John Fox would be wise to have both fullbacks more involved in the offense, not only to sort out which one is more deserving of making the final 53 but to also keep the offense moving in the right direction.

Previous Post: « Will's 4 Players to Watch on Saturday Night in Arizona
Next Post: Nick's 10 things to watch out for in Bears vs Titans »