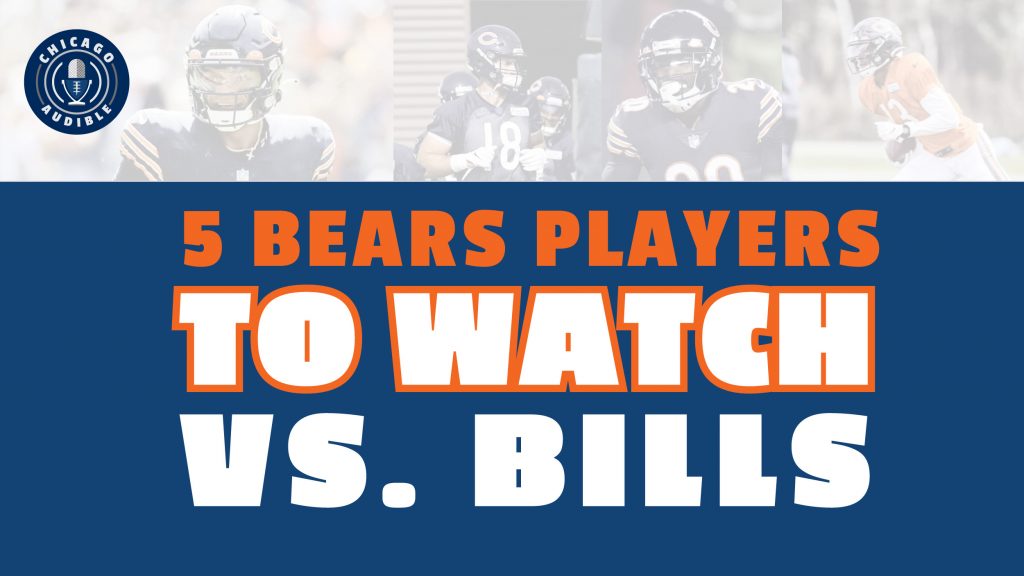 With one more week of training camp now finished, the Bears will get their second opportunity to compete against another NFL team. Week 2 brings the Buffalo Bills and former Bears quarterback Mitchell Trubisky back to Soldier Field.

Outside of that obvious storyline, there are plenty of players who will need to take advantage of this game to make their case to stay on this Bears roster.

Here are five Bears players to keep an eye on in Saturday’s game against the Bills.

It took essentially one quarter against the Dolphins for Justin Fields to not only captivate all of Chicago but the entire nation. It’s not everyday you get a shoutout from LeBron James.

The 22-year-old demonstrated poise in the pocket and the ability to extend plays with his legs. Fields finished 14-of-20 passing for 142 yards and threw a 30-yard touchdown to one of his favorite targets in training camp Jesse James. Fields also rushed for 33 yards on five attempts and scored on an 8-yard run.

Since the encouraging start against the Dolphins, Fields has come back down to earth. He had an OK practice on Monday and had a rough one on Tuesday.

Coach Matt Nagy also revealed on Wednesday that Fields experienced some groin soreness on Tuesday, so the team was “super conservative” with him and essentially held him out of Wednesday’s practice.

But Nagy did say the plan is for Fields to still play against the Bills.

“Every day from here up until Saturday, we just gotta be careful with him, because the plan is we want to be able to evaluate him,” Nagy said. “I think if we asked you guys, would you rather him not practice today and play Saturday, or practice today and not play Saturday, what would you all pick? So you all can’t get mad that he’s not practicing today. We’re trying to be smart with him.”

The focus for Saturday’s game is to see how he can overcome the injury from earlier in the week and also one of his worst practices while also continuing to show overall improvement as a quarterback.

In the Bears’ secondary, there still isn’t a solidified starter at the nickel cornerback position.

So far through training camp, Duke Shelley has taken a majority of the first-team reps. But there have been times, in certain practices, where Marqui Christian has played in the slot from his safety position and filled in as the fifth defensive back in nickel packages.

During a situational team period in Tuesday’s practice, where Fields and the second-team offense were down 10-7 with 53 seconds before halftime, Christian had his best string of plays in camp.

Christian broke up a pass over the middle of the field intended for Rodney Adams. And then on third-and-10, Christian made a diving interception.

And in the game against the Dolphins, Christian — who was playing at safety — forced a fumble on tight end Chris Myarick and it was recovered by the Bears.

Shelley did get the first-team reps in last Saturday’s game, but it will be interesting to see if Christian gets any looks at nickel corner against the Bills.

Similar to last year’s training camp, former first-round pick Artie Burns has earned some reps as the starting corner in the first-team defense.

That was the case in Tuesday’s practice, when Burns replaced Kindle Vildor as the starter opposite of Jaylon Johnson in some of the team drills. It’s also worth noting that Desmond Trufant was out of yesterday’s practice due to a personal reason.

With Burns in as the starter, he made several plays, including getting a sack off the right edge against Andy Dalton and batting down a Justin Fields’ pass intended for James.

One of Burns’ biggest issues in making this a three-corner competition from the start has been his availability. Burns had a quad injury on Aug. 6 and returned to practice 10 days later.

But in the 17 days of training camp practices so far, Vildor, Burns and Trufant have all taken reps with the first-team defense.

Clearly, Desai is still trying to determine who is the most deserving to start. And Saturday’s exhibition game against the Bills may help to determine who that player will be. Burns may not have been in the mix to become the starter when training camp began, but stacking good practices and preseason games together could change that narrative.

The most news Bears fans have heard from rookie wide receiver Dazz Newsome was when he broke his collarbone in OTAs over two months ago.

On Aug. 2, Newsome was taken off the physically unable-to-perform (PUP) list and has since been working his way back into being a part of the offense.

And to his credit, over the past week, Newsome has been more involved in practice. He caught several short passes in team and 7-on-7 periods from Fields on Monday’s practice.

But Newsome should see a good amount of reps against the Bills, especially since the Bears have cut wide receivers Jester Weah and Justin Hardy earlier this week.

It’s important that Newsome gets quality playing time in these final two preseason games because veterans Marquise Goodwin and Damiere Byrd — who will be playing more in the slot — have taken all of the first-team reps.

But Goodwin and Byrd are just on 1-year contracts, leaving the door potentially wide open for Newsome to have more of a prominent role in Year 2.

The Bears need someone to step up and take over as the starting left tackle.

Nagy announced on Wednesday that rookie Teven Jenkins was going to undergo surgery to fix the back injury that has kept him out all of training camp. But it sounds like Jenkins’ injury won’t impact his long-term NFL career.

“From everything that I’m hearing, it sounds very, very positive,” Nagy said. “… Once this happens and you get this surgery, that things should be fixed and pretty good. That’s the good part in this whole thing.”

With Jenkins out for a couple of months, according to NFL Network’s Ian Rapoport, it will be Elijah Wilkinson and Jason Peters competing for the left tackle position.

In the preseason game against the Dolphins, Wilkinson played 77% of the offensive snaps — the second-most on the Bears’ offense, and Nagy liked what he saw from the fifth-year player.

“The O-line in general did great, and I thought he played well, too, I really did,” Nagy said. “He had the tough break there being out for a little bit, but then he’s gotten back. The thing I appreciate about Elijah is that he’s taken all these reps, there’s a lot of reps there that he’s taken at left tackle … I mean he’s really trying his best to learn Juan’s techniques. It’s a little bit new to him and put that into fruition with our defense, going against our defense, and so I’m proud of him for that. Again, here it is. It’s a great opportunity for him to take it over and see what he can do, so he’s trying to do his best.”

Nagy announced on Thursday that Peters will be practicing for the first time today. And according to him, the 39-year-old future Hall of Famer “still has a lot of game left in him.”

Against the Bills, Wilkinson should get the majority of the snaps, and he will have to make the most of the game reps if he wants to be the Week 1 starter.