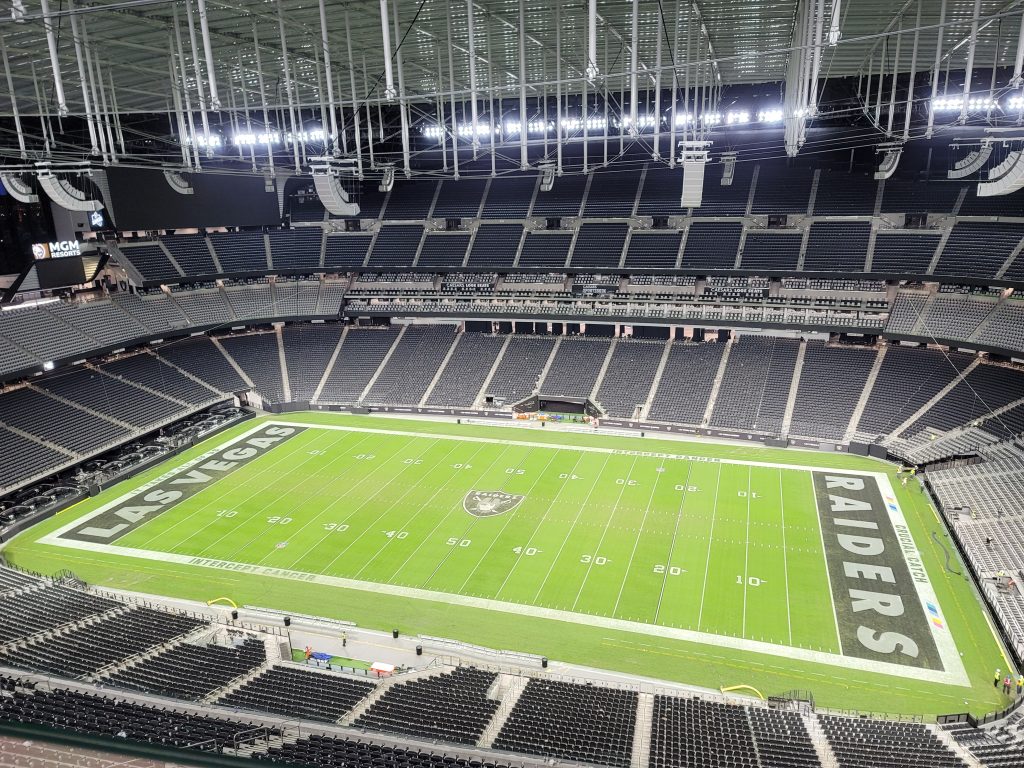 LAS VEGAS — With just over seven minutes left in the fourth quarter, the Bears’ offense faced a third-and-12. Allegiant Stadium was roaring and Raiders fans were waving their white towels as they rose to their feet.

Chicago desperately needed someone to make a play.

Rookie quarterback Justin Fields lined up in the shotgun while 59,122 people fixated on him. He took the snap, stood poised in the pocket, surveyed the field and delivered a strike to Darnell Mooney for 13 yards.

The crowd fell silent. And the Bears kept the clocking ticking as they held onto their five-point lead.

Six plays later Cairo Santos made a 46-yard field goal, and the Bears later went on to defeat the Raiders, 20-9, to improve to 3-2 on the season.

Nagy said the offense has been waiting for the right opportunity to call that third-down play.

“Justin has waited, all week we kind of had that bad boy sitting and waiting for that moment,” coach Matt Nagy said in his postgame press conference. “Now I don’t know if it’s to win the game, but it’s one of those crucial third-and-12s. That was a big-time play in that game, and if you don’t get that, the moment meter swings to them big time … Mooney to get open to make a play, Justin went through his progression, the offense line blocked, Justin made a great throw and Mooney made a great catch and it was first down.”

Despite being in that hostile environment on the third-down situation, Fields was focused on just one thing.

For the Bears fans in attendance and all the ones back home watching on their televisions, that throw was different. How many times have Bears quarterbacks failed to execute on that kind of play when their team needed them most? The number seems endless.

But Fields rose to the occasion, and that was well after taking some hits that required medical attention on the sideline.

The Moreano Minute is back! Check out my quick recap from the #Bears' 20-9 victory over the #Raiders. pic.twitter.com/XKJls7I9ME

The first one occurred on the Bears’ second offensive possession of the game. Fields took a shot in the back after trying to spin for extra yards on third-and-4. Then on the Bears’ 16-play drive that ended in a touchdown, Fields said he hyperextended his left knee while trying to avoid a tackle.

Still, the rookie played on.

“That son of a buck is tough,” Nagy said.

For Fields, he has a certain approach when it comes to handling the hits he takes throughout a game.

“When I was younger, my dad always told me ‘If I can get up and walk off the field, do it,’” Fields said. “So that’s kind of why I don’t like staying down long. Just trying to get up off the field.”

Fields’ first touchdown pass in a Bears uniform also demonstrated that toughness he has displayed in the first five games of his NFL career. Immediately after Fields found Jesper Horsted for a two-yard touchdown early in the second quarter, linebacker Denzel Perryman hit Fields while he was rolling to his right.

Even with the pressure in Fields’ face, Horsted said “it was another good ball” from his quarterback.

The statline from the game won’t necessarily impress anyone. Fields finished 12-of-20 for 111 yards and the one touchdown pass. But his ability to make clutch plays in big-time moments is exactly what the Bears has been missing from the quarterback position.

And his next opportunity to showcase his skills will be against the Green Bay Packers at Soldier Field.