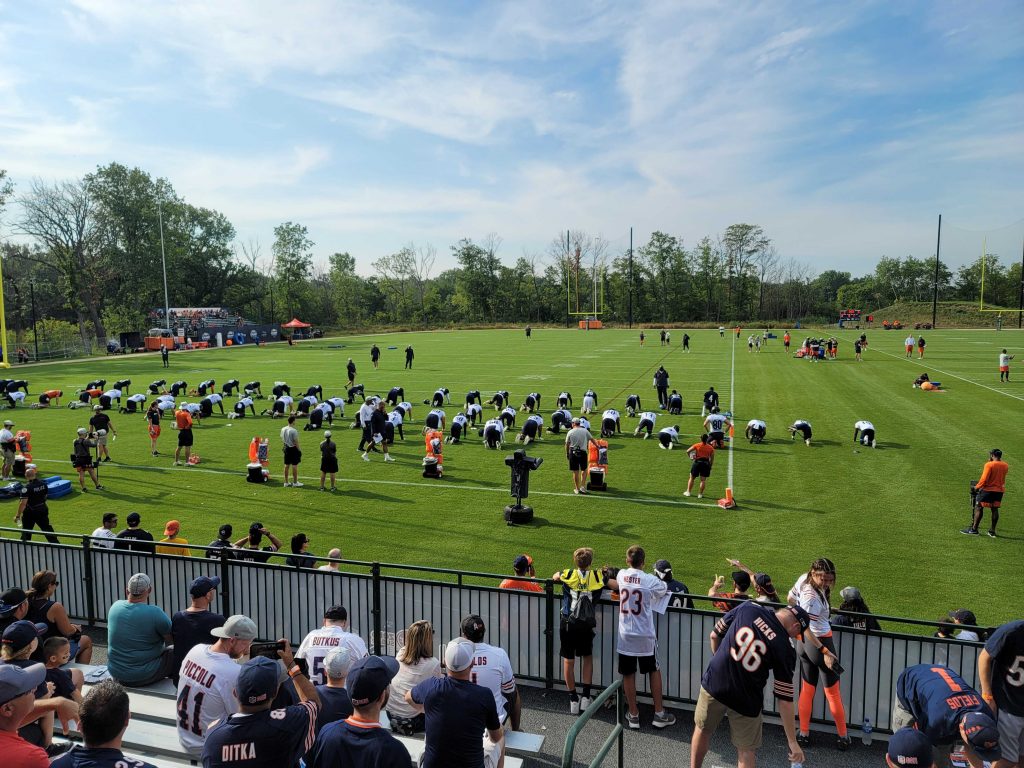 For the Bears first practice following an embarrassing 41-15 loss to the Buffalo Bills at Soldier Field, Chicago returned to Halas Hall on Monday to begin its preparation for Saturday’s preseason finale against the Tennessee Titans.

Bears coach Matt Nagy started the day by disclosing the lengthy injury list of players who would not practice on Monday.

Even though the injured players list is longer than most would like, Nagy did shed some good news.

Roquan Smith, Danny Trevathan, James Daniels and Eddie Goldman all returned to practice while Germain Ifedi was activated off the physically-unable-to-perform list (PUP) and would also participate for the first time in training camp.

Here are my top observations from Monday’s practice.

Justin Fields Gets Reps With (Some) Starters

After Nagy said that Justin Fields would start getting reps with the starting offense, there has been an absolute frenzy from Bears fans to see that come to fruition. And it’s justified since Fields has yet to play with the entire starting offense in practice or in the two preseason games.

And in Monday’s practice, Fields still didn’t get an opportunity to play with the entire first-team offense all at once. But he did finally get some reps with some of the starting skilled players during team periods.

Throughout the practice, Fields had reps with wide receivers Allen Robinson and Darnell Mooney and also tight end Jimmy Graham. In the previous training camp practices, Fields only had reps with starting skilled players in 7-on-7 and 1-on-1 periods.

Fields did connect with Mooney over the middle of the field. He threw an accurate ball and Mooney reached out to haul in the pass. Later in the practice, Robinson had man coverage on the left side, but Fields slightly overthrew the fade route, leading to an incomplete pass.

It’s also worth noting that Fields did get at least one rep with the starting offensive line, and that has been somewhat common to see in the training camp practices. At times, Fields will get a play with the first-string O-line after Andy Dalton and the starting skilled players are subbed out with the backups.

On the play in Monday’s practice with the starting offensive line, here is who lined up with Fields.

Nagy is starting to see what Fields looks like with pieces of the first-team offense, and it will be interesting to see if this trend continues or even progresses with the full unit in the coming days and potentially against the Tennessee Titans on Saturday.

As mentioned above, the Bears got two of their starting offensive linemen back for Monday’s practice: Ifedi and Daniels.

And in the individual drills, the potential first-team unit took the field.

Nagy talked about the importance of having the starting offensive line practice for the first time.

“That’s probably the one thing that we haven’t really talked a whole lot about, but we really haven’t had that starting line together this whole training camp,” Nagy said. “So I think for us, we’re excited to be able to see, OK where guys are at the left tackle, get James back, get Ifedi back, get Sam and Cody — who have been playing their butt in practice and in games — really to be able to see that. So, I think it’s important that they start getting some reps here this week and in the game too, possibly.

Although Ifedi was taken off the PUP list, he didn’t participate during the team periods. Instead, the Bears had Wilkinson fill in as the right tackle throughout the practice.

When Peters needed a breather, fifth-round draft pick Larry Borom got reps at left tackle, building off a solid performance that he had in the preseason game against the Bills.

The Bears’ defensive backs gave Dalton and Fields some trouble to begin the team portion of practice. It began with Marqui Christian’s interception on an overthrown pass by Fields. On the play afterwards, Fields had a pass broken up by Thomas Graham Jr. along the left sideline.

After Dalton connected with Damiere Byrd towards the right sideline on a crossing route in team drills, Dalton overthrew Robinson and was intercepted by Kindle Vildor.

In 7-on-7s, Graham broke up another one of Fields’ passes, this time on a deep ball that was intended for Byrd. It looked like Byrd had a step on Graham, but the ball was a little late, which allowed Graham to catch up and break up the pass.

And towards the end of practice in the team drills, Fields tried to fit a ball to Dazz Newsome, who was triple covered by Deon Bush, Christian and DeAndre Houston-Carson, but Bush got his hand on the ball and knocked it away.