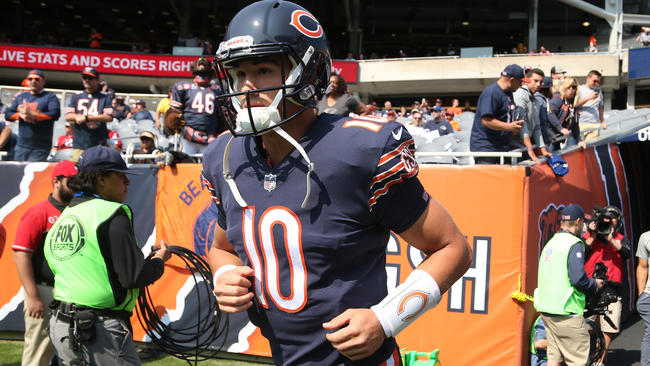 Monday’s are typically the day in the work week that most people dread and ultimately want to get done with.
As a writing tutor, I met with my daily students who stopped by with various questions on their literature homework. The popular assignment for today was constructing a well-thought paragraph on a prompt for the book Of Mice and Men. After overlooking several paragraphs – I decided to take a bathroom break. When I work with the students my phone is away and I rarely check it and only do to see if my girlfriend texted me.
I pulled out my phone and saw the text from my girlfriend, along with something else, a notification from ESPN and it involved the Bears. I thought to myself – what irrelevant, disappointing news do the Bears want to lay on me as walked to the bathroom.
I clicked on the notification, slid right on my smudged screen and waited for the article to appear. I stopped immediately, made sure what I was reading was real and fist bumped the air with a smile that went from ear to ear.
At last, Mitch Trubisky would make his much-anticipated regular season debut as the Bears starting quarterback. After four agonizing games with Mike Glennon providing little to no offense, the Bears finally made the change.
To think, up until I saw Trubisky was announced the new starter, the thought of Bears’ football made me cringe with disappointment. I even said on the last postgame show after the humiliating loss to the Packers that I would not watch my beloved team if Glennon remained the quarterback.

In case you missed it, Will and I recently sat down and discussed the news on our latest podcast. You can watch or listen to that show, right here.

Looks like the Bears didn’t want to lose my viewership and went with the logical and inevitable decision to start the 23-year-old. My whole perspective of the season changed in that moment my phone was opened. Knowing that Glennon will not be taking the field provided a new sense of hope for me and I’m sure Bears fans everywhere.
We don’t know what Trubisky is going to do on Monday night against the Vikings. But that uncertainty is what fans should be looking forward to most. With Glennon, it was all but certain that he would be unable to avoid the pass rush, would commit some costly turnovers and would not provide any spark on offense.

The Bears’ offense finally can expand and offensive coordinator Dowell Loggains can run some new plays in the playbook. Just seeing a play-action rollout pass will animate fans from the statuesque performance we all know too well with Glennon.
Mobility. Wow, the thought of knowing the play has potential to continue even if pressure comes up the middle or from the sides is comforting.
These new emotions won’t just be new to Bears fans but also the players. Offensively, the wide receivers will actually feel like wide receivers. With a quarterback who can place the ball in the smallest of windows must have Kendall Wright and Deonte Thompson ecstatic. Trubisky also can extend plays with his maneuverability in the pocket, which will further help his receivers get open.
Defensively, the unit will be able to catch their breath as the offense can potentially sustain longer drives. Something that was nonexistent with Glennon.
Trubisky could help fix many of the problems currently on the team but growing pains for the young quarterback are to be expected. The former Tar Heel has only had 13 career college starts and most of his reps in the preseason were against third-string talent.
When Trubisky makes that bonehead mistake he shouldn’t be critiqued in the same way Glennon was. The 18.5-million-dollar free agent was supposed to be experienced and was paid handsomely to protect the football. Through 12 quarters, Glennon has eight turnovers, which is the same amount of scoring drives for the Bears this season.
Regardless of how Trubisky performs this season just enjoy he is the new man under center. This news came on a Monday, and I can’t think of a better way to start the week.

Previous Post: « Bears – Steelers: Breaking down the best series of the game
Next Post: I Want to Believe in Trubisky »