My experience at the 2016 NFL Draft included celebrating the Chicago Bears first round pick from Soldier Field, meeting retired Bears and an iconic sports analyst, and seeing everything Draft Town had to offer.
On Thursday, I was able to attend the 2016 Miller Lite Draft Party. For $25 I was able to watch the first round of the draft unfold from inside Soldier Field with thousands of Bears fans.
Throughout the stadium, there were sections where former and current Bears were signing autographs, a place to see the best Bears from each decade, and an opportunity to go on Soldier Field and compete in drills and take photos in the end zone.
Being able to stand on the grass that so many of my favorite players have played on was a surreal moment. I envisioned former return specialist Devin Hester making a cut, planting his foot hard into the forgiving grass of Soldier Field and bursting through a gap, taking a punt back for a touchdown.
I just wish I had a football, so my brother could throw an over the shoulder pass towards the right corner of the end zone, so I could practice my touchdown celebration. 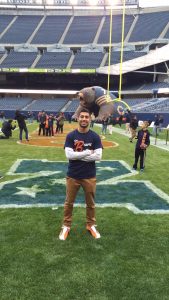 As my brother, friend and I were walking amongst the blue and orange crowd to find a place to watch the draft, I came across a familiar face.
Former defensive lineman Anthony Adams was walking through the crowd and people didn’t seem to recognize him. Maybe it was because he wasn’t suited up in his Bears attire, instead he wore a shirt that had the words “Spice Adams” on the back.
I immediately did a swim move on the person in front of me, tapped Adams on the shoulder and asked if he would take a selfie with me. 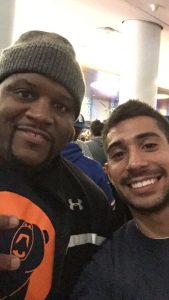 The main reason everyone was there was to see who the Bears would draft in the first round, and experts had the Bears drafting a corner, outside linebacker, quarterback, or a left tackle.
Nobody knew the answer.
As soon as the Bears traded up from the 11th pick in the draft to the 9th, everyone inside of Soldier Field got excited. People wanted to know who was going to be the guy that will help bring this historic organization back to being relevant again.
When ESPN said the pick was in, you could feel and see multiple emotions coming from Bears fans. Some were jumping up and down shouting “Lets go already”, others staring up at the TV screens with wide-opened eyes, and many clenching their fists nervously awaiting for a name to be said.
At last, Leonard Floyd was announced, and all those emotions were let out.
At that moment, I was not excited about the pick. I thought Floyd was a great athlete, but not heavy enough to play the position at the NFL level. However, after watching some highlight tape and a good night’s rest, I felt a lot better about the Bears decision.
Most of my Thursday was spent at Soldier Field, but Friday I would spend most of my day in Draft Town.
Last year, Draft Town was the size of about 15 football fields, this year it expanded to the size of about 20 football fields. With more space, Draft Town accommodated more attractions and exhibits than ever before.
I was able to see the inside of Jay Cutler’s locker and not too far away was his number one target Alshon Jeffrey’s locker. Too bad Jeffrey has not been at voluntary workouts, but his locker with all his equipment was present in Chicago.

As my brother, friends and I were exploring the different exhibits, I heard a familiar voice, a voice that is heard quite often on ESPN. The voice was Adam Schefter’s and he was on a mini football field answering fan’s questions.
The inner reporter in me ran up to where he was, bypassed some people and made it towards the front, anxiously waiting to ask a question. 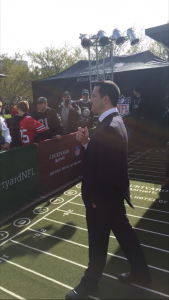 I asked Schefter:
“What do you think of Leonard Floyd and how will his weight affect him at the next level?”
“Best pass rusher in the draft,” Schefter said. He went on to say that John Fox and Ryan Pace will find a way to put him in the best spots to make plays.
I just asked Adam Schefter a question, my day had already been made, but a couple minutes later I would run into another former Bear. This time, it was tight end Desmond Clark. Unlike Adams, people recognized Clark and were asking for pictures.
I waited my turn and got my picture taken. 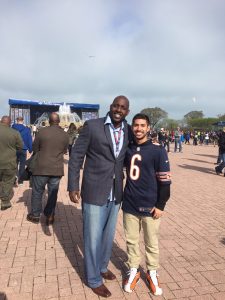 After meeting Schefter and Clark my day felt complete, but then in the College Corner exhibit, where mannequins of different college football teams were located, I found an Iowa Hawkeye, and instinctively took a picture.
After taking pictures of just about everything I decided to put my athletic ability to the test and do the vertical jump. It is safe to say that I will not be getting a call from any scouts anytime soon.
**(Editor’s Note: Nick admitted on our latest show he only had a 25-inch verticle)**
After seeing several exhibits, testing out my vertical and buying an eight dollar beer, it was time to see who the Bears were going to draft in Selection Square.
The Bears were on the clock, fans were getting excited and then I heard the Bears traded down. Not a big deal, it happens all the time and I could not complain about additional picks, so my friends and I walked around and came back when the Bears were back on the clock.
Again, the Bears traded down.
Unfortunately, I ended up leaving Draft Town before the second and third round picks, but I got plenty of updates on the walk back to the train station.
The coolest thing about Draft Town was seeing fans from all over wear their teams’ colors with pride. I saw two Jacksonville Jaguar fans, who didn’t know each other say hi and and compliment each other on their jerseys, which both happened to be quarterback Blake Bortles.
When I was by Schefter, a Pittsburg Steeler fan started singing their fight song, hoping more Steelers’ fans would join in.
The representation from each team that was displayed at Draft Town showed what the NFL means to so many people, from all over. Even though some teams don’t get along with each other, being at Draft Town made it feel like that didn’t matter, it felt like a tight knit community.
The 2016 NFL Draft was a success and the city of Chicago was a great host for the second straight year. I would love to see it back for a third time, but that does not seem likely.
The 2016 NFL Draft, Draft Town, and the Miller Lite Draft Party made my experience in Chicago one I will never forget. 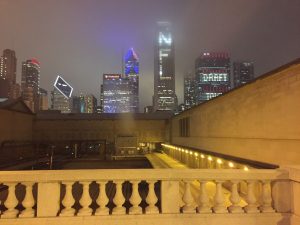 Previous Post: « Our Three 2016 Chicago Bears Mock Drafts
Next Post: What Does Each Rookie Bring to the Table? »