There is no offseason in the NFL, at least not for personnel departments, coaches and the media.
Which is why Da Bears Brothers will be in Indianapolis this week for the NFL’s annual festival of 40 times, failed drug tests and fast-rising workout warriors: the NFL Scouting Combine!
Our goal is to be your eyes and ears in Indy on Saturday, so that everything we see and hear you see and hear.
Here is Part 2 in our ongoing DBB at the Combine series …

Should the Bears add another receiver to the mix?

The Bears said Wednesday that they are aggressively pursuing security of Alshon Jeffery with a long-term deal.
Still, don’t be surprised if the Bears select a receiver in this year’s draft, as besides Jeffery there are a lot of question marks surrounding the position.
Eddie Royal was plagued with injuries last season. He turns 30 in May, and it’s hard to determine how much of a factor he will be in the upcoming season. Kevin White missed his entire rookie season and is a behind the 8-ball in terms of his development. Of course, behind those two are a group of unimpressive receivers including Marquees Wilson and Josh Bellamy.
With Dowell Loggains taking over at offensive coordinator, certainly he would like to add talent on the outside for Jay Cutler. So while some optimism surrounds the position, there is a possibility of drafting another wideout.
So, pay close attention to what happens in Indy so you know what the Bears are getting if one of these names are called on draft day.

Boyd became one of the most prolific pass receiver in Pitt’s history as he holds the record for receptions (254) and receiving yards (3,361). The kid is competitive and plays with confidence. He has powerful hands, he also can return kicks and punts, something that the Bears desperately need. Boyd is quick and runs good routes, the Bears could possibly take him in the third round.
Drills I’m watching: 40-yard dash, the gauntlet, verticle jump

Okay, wouldn’t it be fun yelling “Geronimo?” But seriously, the kid is a solid receiver who can get off press coverage and is a red zone weapon. He puts in good effort while being a blocker on the edge, he is a natural leader and is a grinder, which is the exact type of player the Bears need on their roster. He is quick for his size (6’3) but does lack the speed to be a true deep threat. Could be taken in rounds 3-5.
Drills I’m watching: the gauntlet, 40-yard dash, three cone

Jared Goff’s right-hand man. The two were a great combination for Cal. He had three touchdowns in the Armed Forces Bowl, and scored once every 5.3 receptions. He can reach his top speed early, and has impressive hand strength. Has the ability to make highlight catches, but his lean frame (6’3, 195) is concerning. He also has some issues with drops at times. The Cal Bear could become a Chicago Bear in the middle of the draft if he’s still on the board.
Drills I’m watching: 40-yard dash, over shoulder catch, the gauntlet 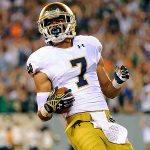 I know I’ve been talking about multiple different receivers in my big board posts, and Fuller did not make the list. On Saturday, I would like to see what potential he has. Fuller has surpassed 1,000 yards receiving the last two seasons at Notre Dame, and I think that trend could potentially continue into the NFL because of his big play potential. What I worry about is making the typical catch as his hands are not the most reliable.
Drills I’m watching: vertical jump, the gauntlet, over shoulder catch

Shepard is not the biggest receiver in the draft, but he is quite reliable. His freshman year he had 45 receptions and never looked back. He finished his senior season with 86 catches for 1,288 yards and 11 touchdowns. Shepard has shown that he is a good route runner and has a pair of good hands to haul in passes. What hurts him the most is his size. If he can overcome that, then the moon is the potential for Shepard.
Drills I’m watching: 40-yard dash, the gauntlet, over shoulder catch

The Bears struggled to score in the Red Zone in 2015. Adding a receiver that is 6’4 can provide the big frame that is needed to help add more points in the Red Zone. He’s not going to blow your socks off with his speed, but he accelerates well. As long as Wilson can prove he has good hands, and can show he puts in time in the weight room, I don’t see why the Bears would not seriously consider him. The only thing that raises red flags is his off the field record, getting arrested for marijuana in March of 2015
Drills I’m watching: the gauntlet, bench press, 40-yard dash
Tomorrow we will break down the quarterbacks that we find intriguing.
Could this be the year the Bears find Jay’s eventual replacement?
There’s some debate on that question, and to be honest, we are unsure if Ryan Pace will grab a quarterback, let alone when in the draft. This position seems to be the biggest mystery surrounding our Bears. That said, we will break down some names we will keep on eye on tomorrow.
In the meantime, here is a special invitation for you …
After our day at the Combine, we will have a Special Combine Edition of Da Bears Brothers, where we will share our first-hand takeaways from our day in Indy.
Join our email newsletter today to make sure you don’t miss the details about our live report, or to watch the replay if you can’t attend live.
Sign up for free here.
We’ll talk to you soon! #BearDown

Related: DBB at the Combine: Which of These Tight Ends Will be a Bear Next Season?

Previous Post: « DBB at the Combine: Which of These Tight Ends Will be a Bear Next Season?
Next Post: Five Free Agents Chicago Must Pursue to Strengthen its Defense »