There are seven days until the NFL Draft, I repeat … Seven Days. Thank goodness. Finally, we are getting closer to not dealing with any more mock drafts and being forced to listen to speculation from any of the so-called “experts.” With that being said each member of our staff will put out one final mock draft after this one, so stay tuned.
But, nobody is certain who the Bears are going to draft, especially with the No. 3 pick, we can only speculate and give our opinions.
In my third mock draft I go a completely different route and I’m sure it will cause some controversy. Let me know if you think I just bombed this or maybe, just maybe, I’m on to something. 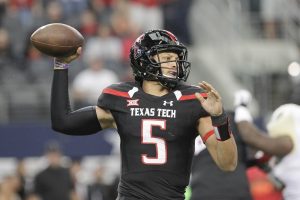 Previous Pick: Jamal Adams (S), LSU
Alright, before you decide to close out of my mock draft just give me a second to explain myself. Is taking Mahomes with the No. 3 overall pick a bit extreme? Yes, especially when you look at all the defensive talent in the draft. But if the Bears are seriously considering drafting a quarterback within the first two rounds then they have no choice but to draft one at No. 3. From what I’ve heard, and who knows if this even means anything, is that the Bears don’t seem interested in Mitch Trubisky. Based off of that I went with the guy who has the most upside and that kept leading me to Mahomes. He has that x-factor when it comes to making the difficult throws look routine. His arm is incomparable to the rest of the quarterbacks in this draft. Yeah, he comes from a spread offense at Texas Tech, but that doesn’t mean he can’t succeed in the NFL. Besides, I don’t expect him to start this season, Mike Glennon will be the starter and that will give Mahomes an entire season to develop. I think Mahomes can be special and if this is the quarterback general manager Ryan Pace wants, then he needs to go after him. 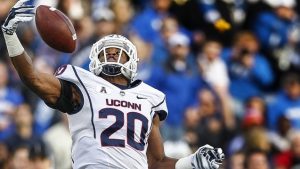 Previous Pick: Chris Wormley (DE), Michigan
A common theme for Pace when it comes to the draft is that he likes to add guys to his team who are physically gifted. He added Kevin White two years ago, last season he drafted Leonard Floyd and his big-time athlete in this draft will be Melifonwu. His NFL Combine performance had scouts drooling from the mouth and got NFL teams talking. He is athletic, is capable of covering ground quickly and no doubt can deliver a big hit. He does need to learn how to read coverage better and that will come with time. Melifonwu will have veteran Quintin Demps to mentor him and through his guidance can develop into an impact player for the Bears. The Bears secondary is in dire need for someone to take over and provide life at the position, the former Husky can do just that. 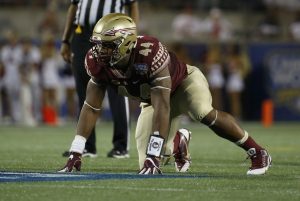 Previous Pick: Nathan Peterman (QB), Pittsburgh
The Bears will look to add another pass rusher who can get in the defensive line rotation opposite of Akiem Hicks. Walker is a prospect that shows promise and it all starts with his relentless motor. After watching a couple of his games, I noticed, regardless of the direction of the play, Walker was usually in pursuit trying to help his teammates make the tackle. He also has active hands and will use them when he does his signature swim move or when he swats down a pass. The former Seminole had 17 sacks last season, which was the second most in the country. The knock on him is that scouts don’t believe he is big enough to be on the edge, Walker is listed at 6-foot-4, 280 pounds. I find that hard to believe when guys like Solomon Thomas, who is 6-foot-3, 273 pounds, and the 6-foot-3, 286-pound Jonathan Allen have been seen as having ideal size to fit the Bears system. If the Bears draft him he has a great opportunity to play and with time will eventually replace Mitch Unrein. 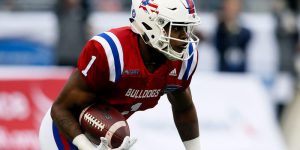 Previous Pick: Carlos Henderson (WR), Louisiana Tech
Well look who is in the exact same spot as my previous mock draft, it’s Henderson. I tried looking for other receivers who could potentially replace him in the fourth round and I kept on running into guys who didn’t quite know how to catch the ball without bobbling it. So, I will remain with the man who can line up in multiple positions on the offense and can provide versatility. At 5-foot-11, 199 pounds he is a guy that can be put in the slot or the outside. This will give him more opportunities to be a part of the offense, maybe even in his rookie year. 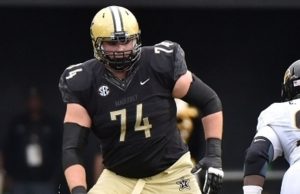 Previous Pick: Erik Magnuson (OT), Michigan
For some odd reason, I just believe the Bears will draft an offensive tackle with their second fourth-round pick. But Holden is a guy that has played both tackle positions at Vanderbilt. He excels at run blocking and is capable of getting to the second level. Last season, Bears’ right tackle Bobbie Massie struggled at first but over the course of the season played with more consistency. The Bears should look to add some depth behind Massie or even left tackle Charles Leno Jr. Holden would be a good player to add to the roster. 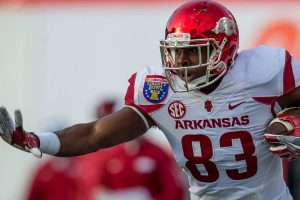 Previous Pick: George Kittle (TE), Iowa
The Bears currently have six tight ends on the roster and they will add a seventh with their fifth-round pick. Sprinkle is more of the prototypical tight end, meaning he is capable of running routes and catching the ball and he is a great blocker. Nowadays, you see more of the tight end that can stretch the field. That would be great for the Bears to have but when you look at their system and how their offense will be run, it will no doubt go through running back Jordan Howard. So having a tight end on the field who is cable of catching but won’t be a liability when it comes to blocking will be key for the Bears when looking to add to the position. I really wanted to keep Iowa tight end George Kittle here, but after talking with my professor, who covers the Hawkeyes he said there was no chance he would last until the fifth-round.

Previous Pick: Ezra Robinson (CB), Tennessee State
Hey, it’s another guy who is in the same exact spot from my last mock. The main reason I kept Robinson was due to his size, at 5-foot-11, and also his playmaking ability. Last season, Robinson had a career-high five interceptions, two of them returned for touchdowns. We all know the Bears need to start creating turnovers moving forward and Robinson has the ability to do that. But first he needs to make the roster and he will have plenty of competition with the 12 cornerbacks that are currently on the team.