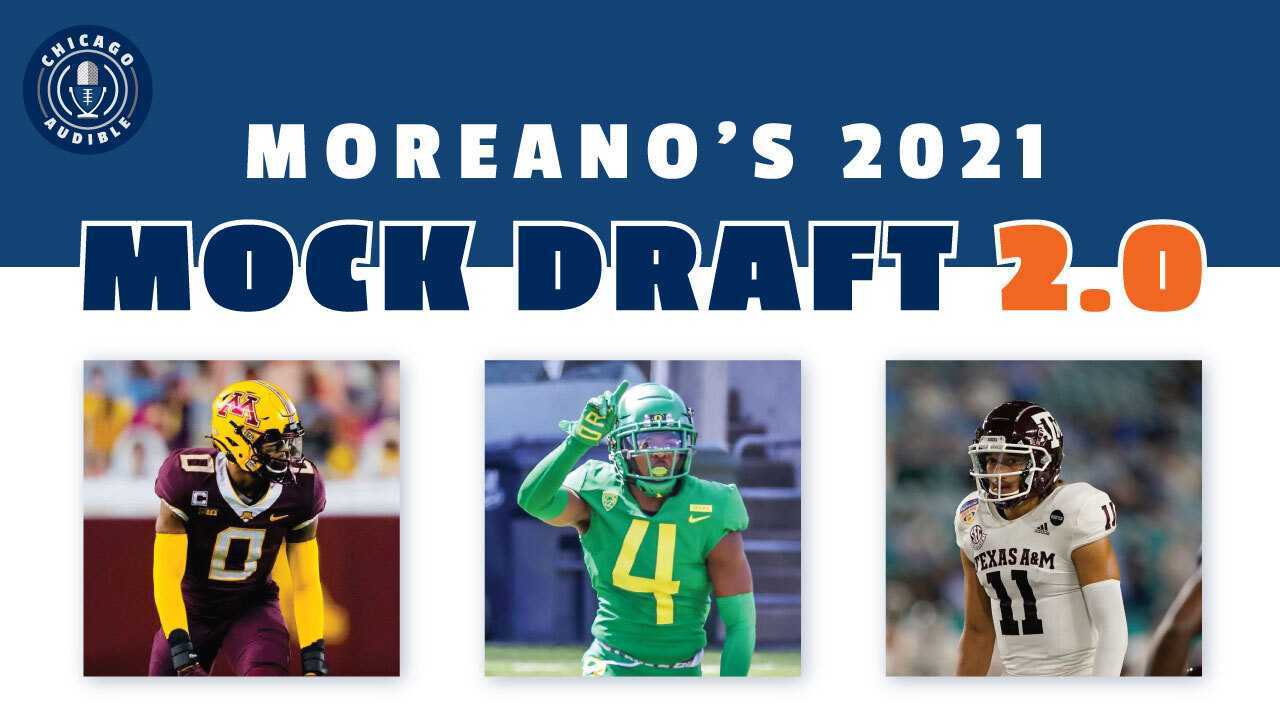 For the Chicago Bears, there is a high chance the decisions from this draft will determine the fate of general manager Ryan Pace and coach Matt Nagy.

There are a lot of needs on the roster, and with only three picks in the top 100, it will be interesting to see how the Bears are planning to address the deficiencies on the team.

Will they be aggressive and move up? Or find a trade partner and recuperate picks?

In five days, we will have a better idea.

But here is one way the Bears could approach the draft. For this second mock draft, I used The Draft Network’s mock draft simulator.

The Bears need more playmakers on offense. What else is new? But this need only intensifies if 2021 is Allen Robinson’s last season in Chicago. The two-time Pro Bowler and back-to-back 1,000-yard receiver signed his franchise tag on March 18 and the possibility of a contract extension doesn’t seem likely.

So, Bateman makes a lot of sense to not only have an immediate contributor for this season but as a replacement for Robinson moving forward. (Robinson has been phenomenal in Chicago, which makes it hard for any one player to fill the void if he leaves.)

The-three year starter for the Gophers is a technician when it comes to route running. He understands how to set up defenders and when to precisely break off his routes, creating easy windows for a quarterback to throw into.

Like Robinson does for Nagy’s offense, Bateman provides versatility at the position. According to The Athletic’s Dane Brugler, “Bateman lined up across the formation in offensive coordinator Mike Sanford’s RPO-based offense, playing the X, Y and Z positions over his college career.”

If the Bears decide to take Bateman with the 20th overall pick, this will be Pace’s first wide receiver drafted in the first round since he selected Kevin White No. 7 overall in 2015, which was his first pick as the Bears GM.

I would be shocked if the Bears didn’t add a tackle on Day 1 or 2 of the draft. At left tackle, Charles Leno Jr. has been trending in the wrong direction for the past two seasons. And on the other side of the line, Germain Ifedi and newcomer Elijah Wilkinson are the two set to compete for the starting role.

The Bears must address the tackle position, and they can do so with Radunz. Bears offensive line coach Juan Castillo’s unit is currently lacking someone who plays with a nasty demeanor. In Brugler’s “The Beast,” he writes that Radunz plays with a “nasty temperament.” This style of play is best seen when Radunz is run blocking.

At the 2021 Reese’s Senior Bowl in Mobile, Ala., I saw firsthand what Radunz is capable of. While going up against higher-level competition, he flashed his mirroring ability and quick feet in one-on-one drills, proving that his tape at North Dakota State wasn’t just a byproduct of playing FCS opponents.

In my first mock draft, I didn’t have Chicago taking a quarterback. This time around, though, I have the Bears drafting Mond to complete the 2021 QB room with starter Andy Dalton and backup Nick Foles.

As a four-year starter at Texas A&M, Mond showcased his quick release, strong arm and ability to extend plays with his legs. He finished as the Aggies all-time leader in passing yards (9,661), completions (801), attempts (1,358) and passing touchdowns (71). Mond is also accustomed to running an offense that utilizes RPOs, which is something that should interest Nagy, especially since Mitch Trubisky struggled to execute them on a consistent basis.

Another attribute that makes Mond an intriguing prospect is how he deals with pressure. When the pocket collapses, Mond is constantly surveying the field to find an open target. He gives an offense a chance to fully execute a play even when things break down.

Pace and Nagy are on the hot seat this season, but taking a rookie quarterback could buy them some time moving forward.

The last time the Bears drafted a quarterback in the third round was in 1990 when they selected Peter Tom Willis from Florida State with the 63rd overall pick.

As it stands today, the nickel cornerback spot is wide open. When Buster Skrine — who is no longer on the team — went down last season, Duke Shelley got his opportunity to start. But the former sixth-round draft pick from Kansas State didn’t play well enough with his limited opportunities to just be handed the starting role in 2021.

The defense would benefit from having competition at the nickel and Graham would be a good candidate to add that competition. In three seasons at Oregon, Graham had 40 passes defended and eight interceptions. He also showed great durability, finishing his career with 39 straight starts.

At the 2021 Senior Bowl, Graham’s change of direction, smooth backpedal and competitiveness really stood out. For a majority of the practices, Graham was one of the most consistent defensive backs and held his own in one-on-one drills.

This offseason the Bears lost some depth at their outside linebacker position when Barkevious Mingo signed with the Atlanta Falcons. To help add to the position the Bears could take a chance on Bradley-King with their first of four sixth-round draft picks.

He is another player that caught my attention while I was at the Senior Bowl. He showed a variety of pass-rush moves in one-on-ones. Sometimes using his speed to go around tackles and then mixing in some power with a bull rush.

The Bears just drafted Trevis Gipson in the fifth round in 2020, but given Robert Quinn’s lackluster play last season, it makes sense to keep adding pass rushers with the hope one of them can become something.

Pace has an infatuation with Georgia players. He has selected four since becoming GM in 2015. Well, Daniel becomes the latest Bulldog to get drafted by the Bears. Along with drafting Georgia players, Pace has taken several cornerbacks in the later rounds. Kindle Vildor was a fifth-round selection in 2020. In 2019, Pace took Stephen Denmark in the seventh round and Shelley in the sixth. After transferring from Georgia Military College, Daniel had 42 tackles and eight passes defended in 2019.

The Bears’ wide receiver depth is a mystery. Anthony Miller is on the trade block. Javon Wims hasn’t proven he is worth keeping on the roster. And Riley Ridley has barely seen the field. There is a need for a backend receiver and Grimes could be an intriguing prospect. He is another Senior Bowl player, and even though he didn’t make as many headlines in Mobile, he still had a good week of practice. He knows how to use his 6-foot-4 frame to his advantage, going up and catching the football at its highest point. He also knows how to find the end zone, scoring nine touchdowns for the Gators last season.

Without even realizing it when I was using The Draft Network’s mock draft simulator, a majority of the players I selected participated in the 2021 Reese’s Senior Bowl. Britt makes it seven players in a row. He makes sense though because the Bears could add some depth at inside linebacker. He fills lanes fast, likes to hit and was known “as a defensive alpha at Auburn,” according to Brugler. During his junior campaign, he had 69 total tackles, with 10 being for loss. He is a thumper and could make an immediate contribution on special teams.