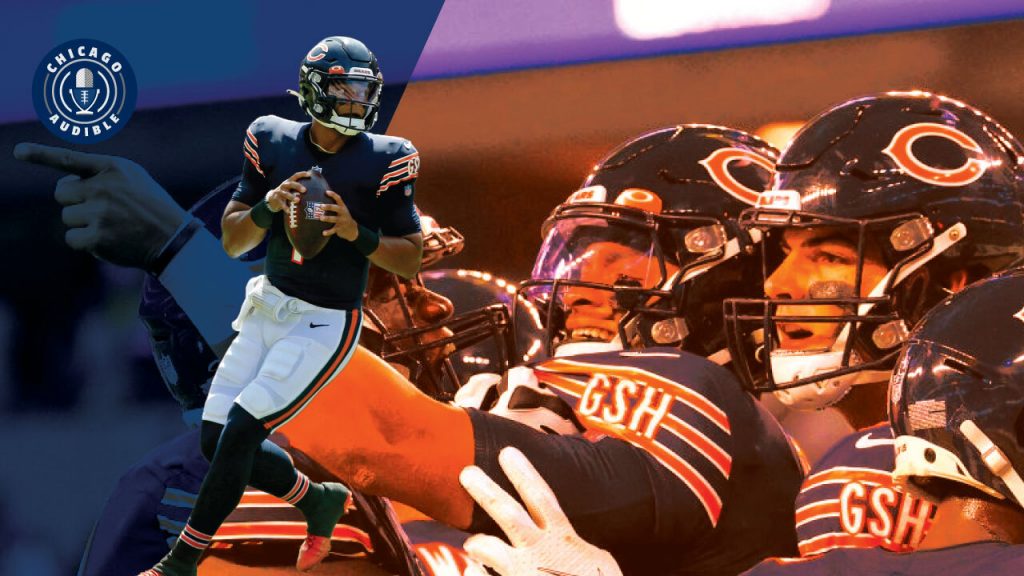 Justin Fields is the future of the Bears organization.

So when he entered Sunday’s contest against the Cincinnati Bengals and remained in for the entirety of the game in place of an injured Andy Dalton, fans got an early showing of the inevitable.

But the highly-touted first-round draft pick doesn’t magically fix all of the offense’s problems. And on Sunday, Fields’ teammates and his coach failed to help him succeed against the Bengals.

Moving forward, that must change — especially with Fields likely starting on the road against the Cleveland Browns on Sunday — in order for the offense to make strides in the right direction.

There were five plays (and honestly more) throughout the Bears’ 20-17 victory over the Bengals where lack of execution and questionable decision making hurt Fields.

On the Bears’ second offensive series of the game, Fields entered the game for the first time and finished the drive after Dalton’s 14-yard run, the play Dalton was injured.

Dalton’s run on first-and-20 helped recover yards lost by James Daniels’ holding penalty the play before. David Montgomery picked up four yards on second down, which set the Bears up for a third-and-2 on the Cincinnati 32.

Montgomery then picked up one yard on third down, and Nagy elected to go for it on fourth. Nagy called a quarterback sneak but the O-line didn’t generate any push and Fields was unable to move the chains. 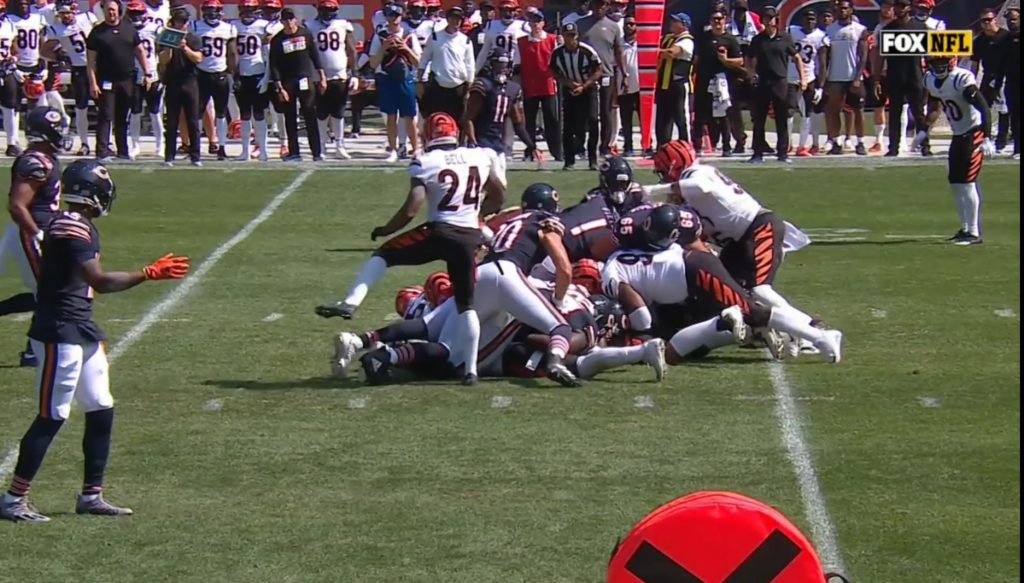 Along with the offensive line failing to drive the Bengals’ defensive line back, the unit also committed two penalties on the series: a Germain Ifedi false start and Daniels’ hold.

When Fields needed his guys up front to clear just enough room so he could use his 6-foot-3, 228-pound frame to extend the ball over the line to gain, the group came up short.

The 12-play, 61-yard drive ended with a turnover on downs. An opportunity lost and potential points squandered.

Allen Robinson and Darnell Mooney are the Bears’ top receivers. And both have proven to be sure-handed targets.

Against the Bengals, though, the receivers had chances to make explosive plays but were unable to haul in accurate passes from Fields.

On Chicago’s first possession of the second half, the Bears were on their own 47 with 6:36 remaining in the third quarter. Fields’ pass was on target to Mooney — who ran 23 yards from the right side of the field to the left sideline — but the second-year receiver couldn’t make the catch. The ball hit Mooney on his right fingertips. 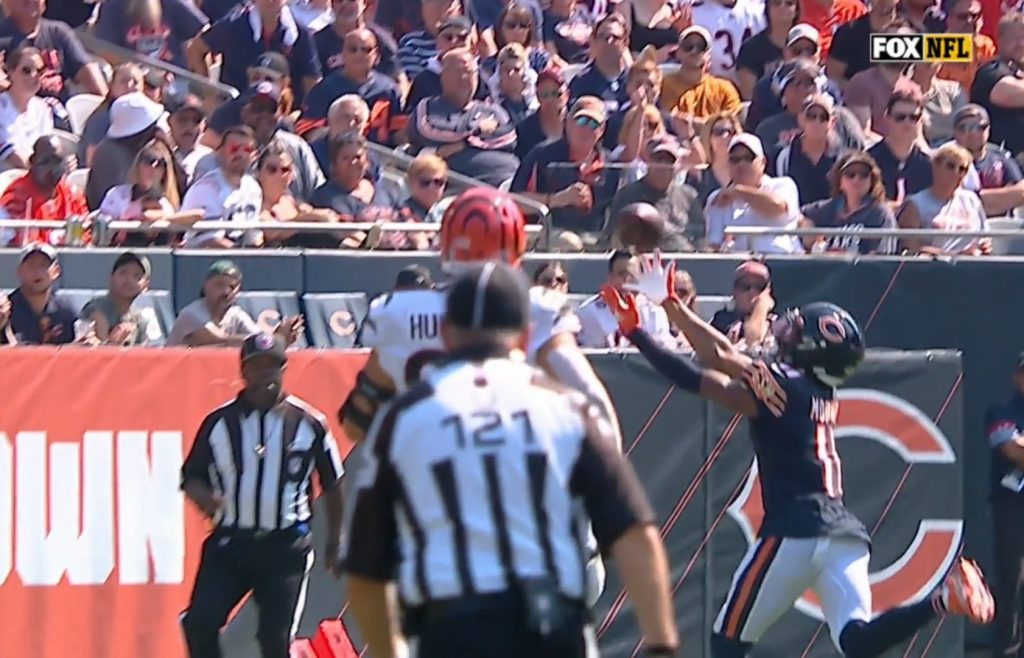 Two plays later, Fields was strip-sacked but was able to recover the ball. The Bears punted on fourth-and-22.

After the Bears’ defense caused two-straight interceptions to start the fourth quarter, Robinson had a chance to put the game out of reach.

Chicago was up 17-3 with 9:39 left in the game. On second-and-9 from the Cincinnati 35, Fields gave Robinson a chance in the end zone against cornerback Chidobe Awuzie in a 1-on-1 situation but he dropped the ball.

Robinson fought to get inside and the 35-yard pass was placed right in between Robinson’s numbers. The Bears’ best wide out failed to make a play for his rookie quarterback.

Against the Bengals, the Bears’ tight ends combined for only one target. Even though the group didn’t register any receiving yards on the day, Jimmy Graham had a great opportunity to make up for the lack of production.

Following Angelo Blackson’s interception, Chicago took over on Cincinnati’s 9-yard line. The Bears run a zone read and Fields heads towards the left sideline. Leading the way was Cole Kmet and Graham. Safety Jesse Bates didn’t have an angle on Fields, so that left Graham to make the key block on Awuzie. 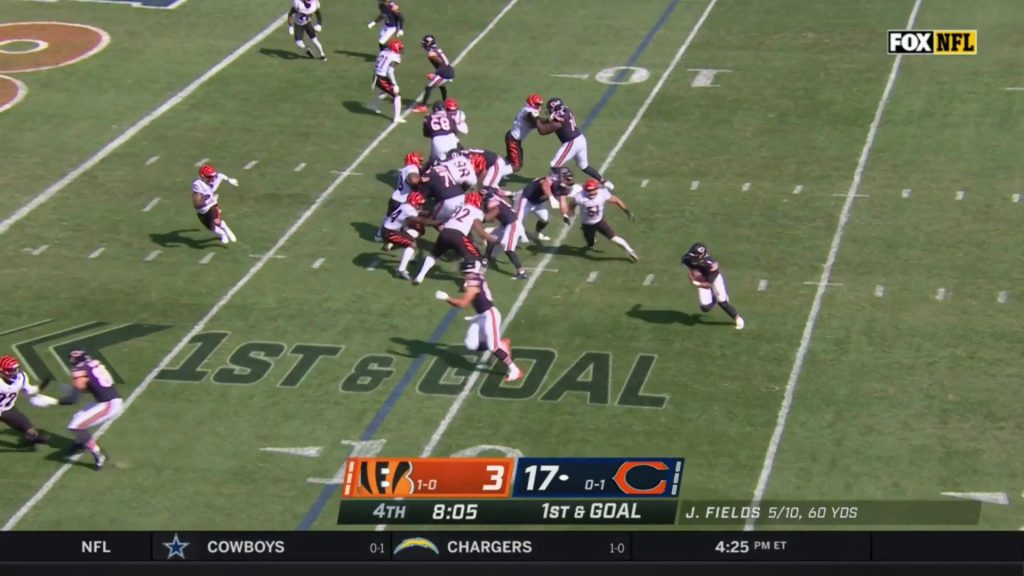 When Graham was about to engage with Awuzie, the Bengals corner avoided the block, got inside and tackled Fields for a 1-yard gain. 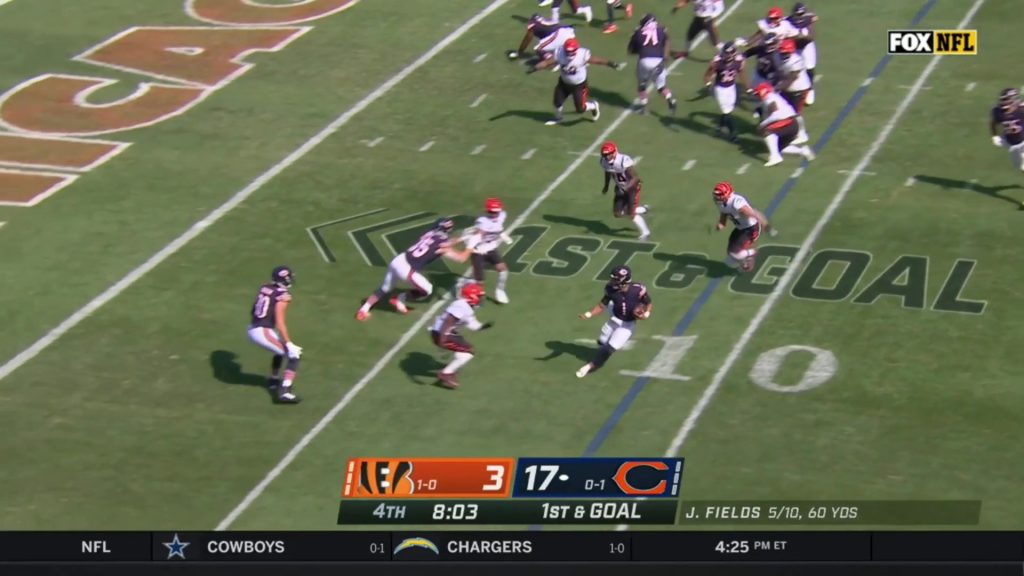 If Graham simply got in Awuzie’s way, there is a good chance Fields would’ve scored on the 9-yard run.

It’s fair to question why Graham was in instead of J.P. Holtz — who helped lead the way on Fields’ touchdown run against the Rams in Week 1. But Graham needed to do the minimum for the play to succeed and he couldn’t do that.

And for the most part, the defense made it difficult for the Bengals to put up points. Cincinnati scored its first touchdown with 4:39 remaining in the fourth quarter, making it a 20-10 game.

Following the Ja’Marr Chase 42-yard touchdown, the Bears gained three yards on first and second down, and Nagy opted to pass the ball on third-and-7 with 3:30 remaining in the game.

Fields was intercepted and the Bengals scored a touchdown on the next play.

Given how the defense was playing, there was no reason for Nagy to call a passing play. The Bengals had two timeouts left in the game and were down by two scores.

If Nagy had called a run and the Bears failed to pick up the seven yards, punting the ball is not a bad play. It would have forced the Bengals to use one of their timeouts and required Burrow to drive down the field to make it a close game.

But Nagy mentioned in his postgame press conference that he wanted “to stay aggressive” in that situation. Of course, Fields will learn from this mistake, but it really shouldn’t have happened in the first place.

What everyone needs to remember is that Fields is still a rookie. At this stage of his career, he shouldn’t be expected to bail out his veteran teammates and his coach.

Even though he has already shown glimpses of that, like on his 10-yard run on third-and-9 in the final minutes against Cincinnati.

That time will come, though. And until it does, his teammates need to finish plays and his coach needs to call the right ones for this team to have the best chance of winning games.