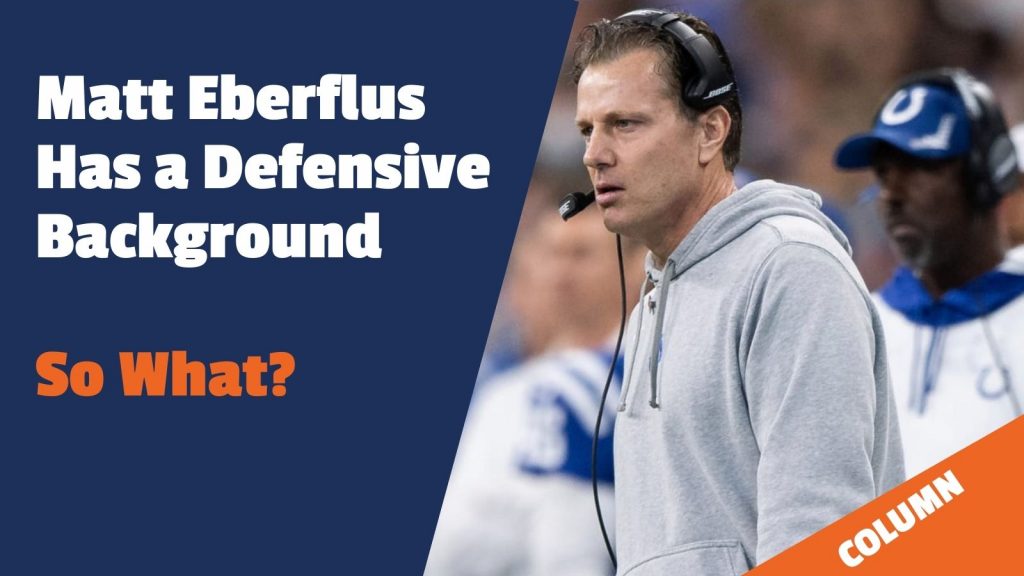 The Chicago Bears have a new head coach.

Two days after Ryan Poles was hired to be the general manager, the 36-year-old made the next big decision for the organization when he selected Indianapolis defensive coordinator Matt Eberflus to become the 17th head coach in team history.

Poles then got his opportunity to interview Eberflus on Wednesday, and then ESPN Senior NFL Insider Adam Schefter broke the news the next morning.

Former Colts’ defensive coordinator Matt Eberflus is being hired as the head coach of the Chicago Bears, per sources.

Eberflus, 51, spent four seasons in Indianapolis, steadily improving the defense each season. According to The Athletic’s Stephen Holder, since 2018, the Colts have ranked in the top 10 in takeaways, points allowed, yards allowed per game and yard pers carry.

Given Eberflus’ background on the defensive side of the ball, it looks like Chicago’s defense is in good hands, which is great.

What about the offense, though?

The thought by a lot of people, including myself — initially — was that the Bears needed to hire an offensive-minded coach. With Fields being priority No. 1, it’s easy to see why that would be the case.

Now, it’s important to wait and see who Eberflus brings in as his offensive coordinator, quarterbacks coach, maybe a senior offensive assistant — which the Colts had in Press Taylor for the 2021 season. Especially since those particular individuals will play a monumental role in developing Fields.

With the #Bears having finalized their deal with Matt Eberflus, what’s next for Justin Fields is a big question. #Eagles passing game coordinator Kevin Patullo is a name to watch for new OC. https://t.co/6qpqk3yij7

While the Bears’ staff comes together in the next days, potentially weeks, and fans lose their minds about who will be a part of the offensive staff, I would like everyone to direct their attention to the Los Angeles Chargers.

Why you may ask? Well, on Jan. 17, 2021, the Chargers hired Brandon Staley to become their head coach. Staley, 38 at the time, has a defensive background, and he was paired with quarterback Justin Herbert, who was going into his sophomore season. Similar to the Bears’ current situation.

Staley helped build a coaching staff that took Herbert from the Offensive Rookie of the Year to a Pro Bowler in 2021. Herbert finished with 5,014 passing yards, 41 total touchdowns and 15 interceptions.

Now, of course, just because Herbert and the Chargers were able to make it work that doesn’t mean the Bears and Fields will have similar results. But the whole idea that the Bears absolutely needed an offensive-minded coach is exaggerated.

Remember offensive coaches Matt Nagy and Marc Trestman? Sorry I had to bring them up.

Or how about that crazy divisional playoff game between the Chiefs and Bills? Well, Sean McDermott is a defensive-minded coach too and look at the player Josh Allen has become. There is no denying Brian Daboll had a huge influence in Allen’s progression, and that’s why Daboll is currently a head coaching candidate.

Eberflus may lack an offensive background, but he does make up for that in his ability to lead and how he holds players accountable.

Now, it will be up to Eberflus to use his 13 years of NFL experience to construct a staff that can not only elevate Fields but also the rest of this Bears offense.