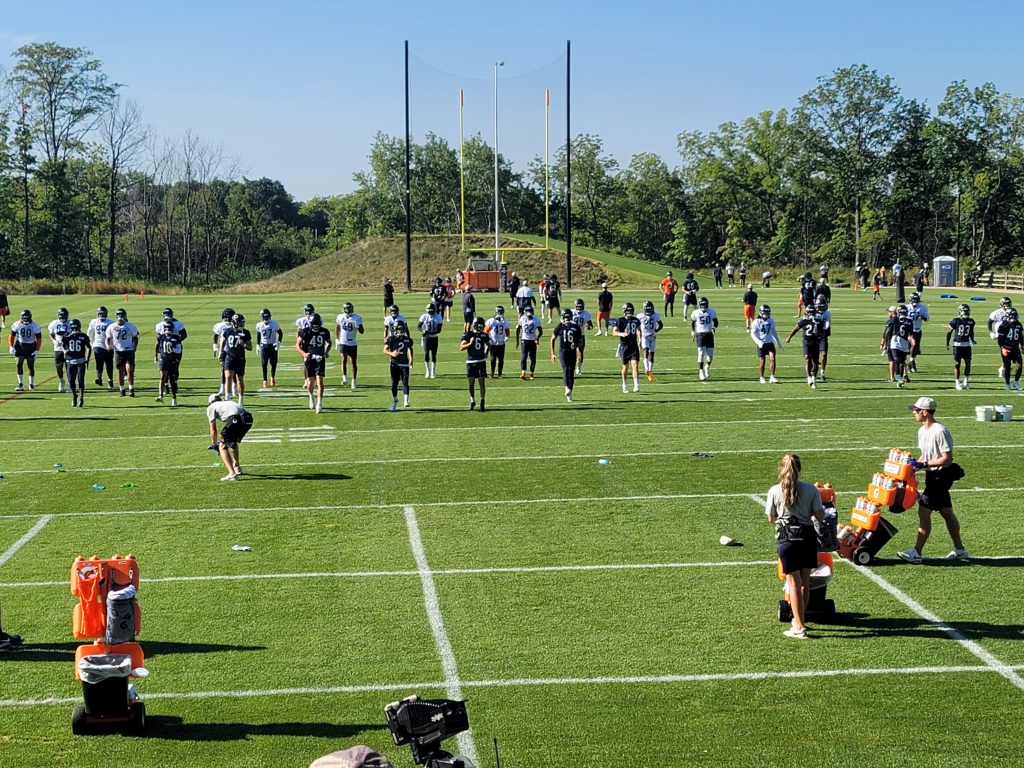 After the Bears’ 20-13 win over the Dolphins on Saturday at Soldier Field, Chicago returned to Halas Hall on Monday morning for Day 14 of training camp.

In coach Matt Nagy’s pre-practice press conference, Nagy was asked whether there was value for rookie quarterback Justin Fields to get reps with the starting offense.

“I think that’s real,” Nagy said. “I think you need to look into that and you need to be able to see, okay, not even so much Adam to see that with his own players, because he gets some of that in practice right now, he’s getting some that, but also it can be good to see what he does against the first-team defense. So when you combine both of those together that’s, again, part of the evaluation process …”

Along with Fields not working with the entire first-team offense, here are some other observations from today’s practice.

It didn’t take long for the defensive coordinator Sean Desai’s defense to create the first turnover on the day. Following the install period, the Bears went into team, and Andy Dalton and the rest of the starters faced the first-team defense.

Dalton tried to fit a ball into Darnell Mooney towards the left sideline, but Jaylon Johnson jumped the route and intercepted the pass for a pick-6. Of course, the turnover bucket came out, but Johnson missed on his dunk attempt.

After the interception, Fields got his chance but against the second-string defense. Fields was nearly picked off by Artie Burns, but Chris Lacy was able to make the catch. Xavier Crawford got himself a batted pass in the period, and Deon Bush almost had an interception on an incomplete pass to Riley Ridley.

Later in the practice, Johnson picked off Dalton again again, this time in the end zone on a ball that was intended for Marquise Goodwin. Johnson elevated over Goodwin to make the play. And Fields was picked off by Teez Tabor in 7-on-7s.

Today was a relatively quiet day for the quarterbacks. As mentioned above, the Bears’ defensive backs made a lot of plays on the ball. Both Dalton and Fields had passes broken up and were intercepted. Dalton did have more missed throws on the day. The one that stands out was his overthrown pass down the right sideline in 7-on-7s to Damien Williams, who had a step on Christian Jones.

But both quarterbacks did have some good throws throughout the practice.

Starting with Dalton, he had the longest completion on the day when he connected with Damiere Byrd down the middle of the field for a deep touchdown in 7-on-7s. Byrd got behind Kindle Vildor on the play and Dalton put the ball out in front for Byrd to make the catch.

One of Fields’ best throws came immediately after Tabor’s interception. Fields completed a pass to Ridley on an over route towards the left sideline. There were a few defenders in the area, but Fields’ pass was where it needed to be and Riley was able to get both feet in bounds.

Fields also had one of his own “anticipatory” throws when he found Ridley in the middle of the field. Just as Ridley was turning back for the ball, Fields threw the pass away from Burns’ outstretched arms.

For the first time in training camp, Eddie Jackson and Tashaun Gipson were both practicing with the first-team defense.

Jackson spoke to the media on Aug. 10 and talked about how Desai can maximize the play out of the safeties to potentially replicate the impact the position had in 2018

“Just moving us around and making it hard for quarterbacks to read us,” Jackson said. “If I line up on the left side one game, I might line up on the right. I might play field, boundary. Just keeping them on their toes so they just won’t go in breaking down film and ‘OK, Eddie is going to always play to the field and to the strength of the formation.’ I might be on the boundary or I might not be on the boundary …”