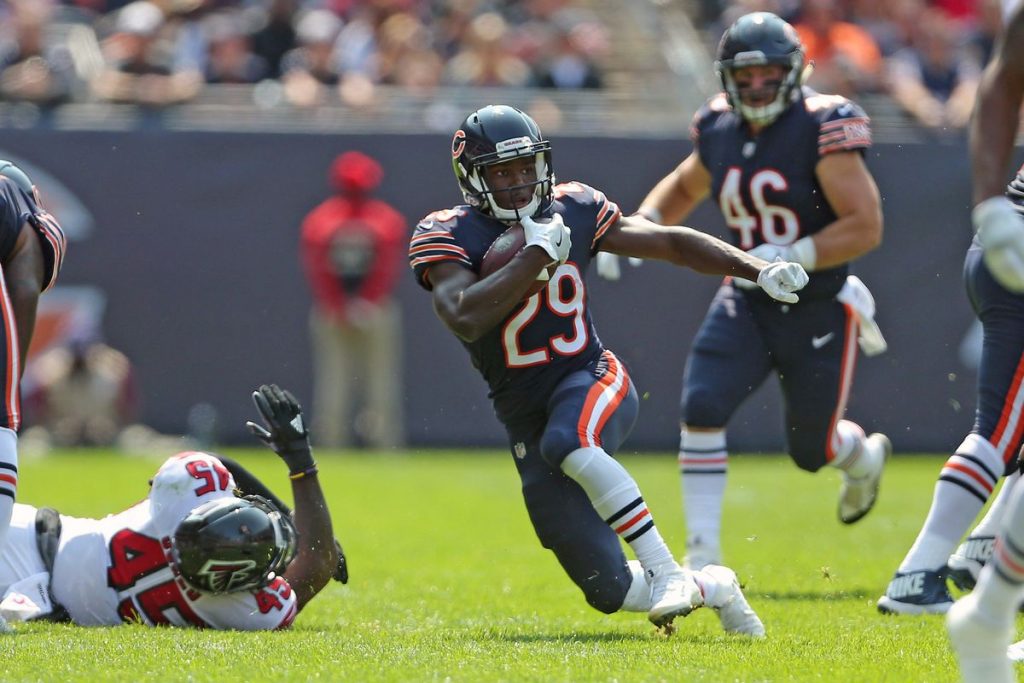 With 20 seconds left before halftime, Jordan Howard took a handoff from his quarterback and scored the first touchdown of the day for the Bears against the Falcons. Interestingly, Mike Glennon wasn’t the quarterback.
Rookie running back Tarik Cohen lined up as the Wildcat quarterback on Howard’s four-yard touchdown run and Glennon lined up as a wide receiver.
With the news that Kevin White will likely be placed on IR due to a broken collarbone, the Bears will need to be more creative with their playing calling moving forward.
Currently, the Bears are without their top three receivers. Cameron Meredith tore his ACL against the Titans in preseason and Markus Wheaton is still recovering from pinkie surgery.
With all the injuries at wide receiver the Bears’ offense must play to their strengths and that lies in their running backs and tight ends. Howard and Cohen have two different running styles that complement each other and with Dion Sims, Zach Miller, Adam Shaheen and Daniel Brown on the roster the Bears must utilize them.
There’s no surprise that the Bears are going to base their offense around the running game this season but they can’t be predictable. Opposing teams will catch on to what the Bears are doing offensively if similar formations are lining up each play.
What the Bears should incorporate in their offense is more of what got Howard into the end zone before halftime.
Trickery. Misdirection. Different.
That’s what it’s going to take to get this Bears’ offense moving and more importantly in the end zone.
Instead of lining up in the standard two receiver, one tight end and two running back set (21 personnel) – formations should be breaking the huddle more often with three receiver or tight ends. It’s these distinct kinds of formations that could give the Bears a slight advantage.
And when it comes to play calling, there shouldn’t be a restriction on what kind of plays are called. Miller was a former quarterback at Nebraska-Omaha, why not use some trick plays with him to throw the defense off guard. An end around with Cohen or Deonte Thompson at the right situation could be an effective play.
There are plenty of options for the Bears’ offense and obviously, they can’t rely on unorthodox plays to win games but with a quarterback who is more of a game manager and with a lack of vertical threats, there should be some unique plays in the playbook.
Offensive coordinator Dowell Loggains has a tall task in front of him, but to get the most of his offense, he must remain creative and willing to give every option in the playbook a try.

Previous Post: « Jordan Howard primed to be NFL's leading rusher
Next Post: Bears-Falcons: Breaking down the best series of the game »