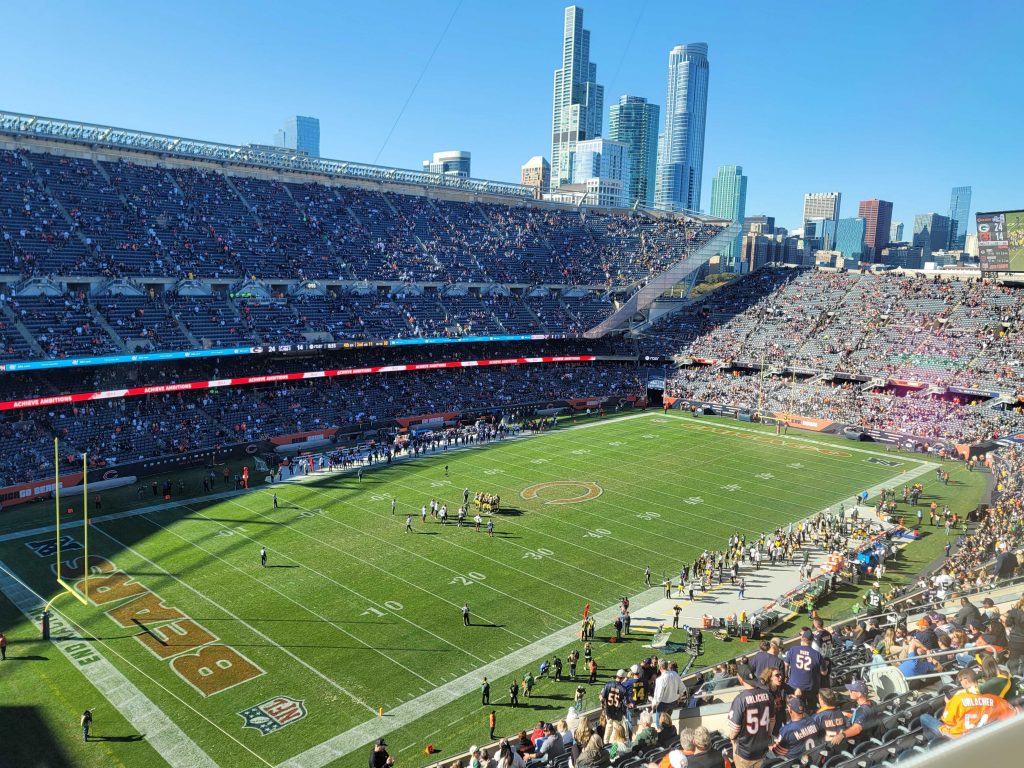 In last Thursday’s press conference leading up to the Bears’ Week 6 matchup with the Packers, edge rusher Trevis Gipson was asked what Marvel supervillain Aaron Rodgers would be.

Gipson responded by saying the Joker, even though the archrival of Batman comes from the DC Universe.

What Gipson should have said was Rodgers is like Thanos — the warlord from the planet Titan — because like the main villain in the Marvel Cinematic Universe, they’re both “inevitable.” And like many of the previous meetings between the two teams, the Packers came away with the victory, defeating the Bears 24-14 at Soldier Field.

After Rodgers scored the game’s final points, with his six-yard touchdown run, he had a few words for Bears fans.

In Rodgers’ postgame interview, he said he saw a woman giving him “the double bird” after he scored and wasn’t “sure exactly what” he said following the touchdown.

But what he said was nothing but the truth. Rodgers is 22-5 against the Bears (including the playoffs). So, he does, in fact, “own” the Bears.

Rodgers finished the game 17-of-35 with 195 passing yards, two passing touchdowns and his six-yard rushing score. He also helped the Packers go 3-of-4 in the red zone.

“He’s won a lot of games, he does a lot of good things, he dictates how things go at the line of scrimmage,” Bears coach Matt Nagy said of Rodgers in his postgame press conference. “So he puts those guys in good situations, but we know that. We have obviously faced him a lot, we see where he is at, and you got to give him credit for that. He’s a hell of a quarterback and he’s been doing this for a long time. When you do have opportunities, you got to be able to make the most of them. …”

Nagy has faced Rodgers “a lot,” seven times exactly as the coach of the Bears, and after Sunday’s latest loss, Nagy is 1-6 against him.

In Justin Fields’ first start against Rodgers, the rookie threw for 174 yards on 16-of-27 pass attempts and had one touchdown and an interception. Late in the first quarter, Fields tried to pull a vintage Rodgers move by taking advantage of what he thought was an offside penalty by nose tackle Kenny Clark.

But it wasn’t — apparently.

“I mean, I saw him jump,” Fields said. “After he jumped, you saw Sam (Mustipher) snapped the ball.”

Fields then took a shot at the end zone but was intercepted by safety Darnell Savage.

Following that interception, the Bears had four consecutive offensive drives end in punts. The Packers — as they usually do — capitalized on the ineptitude of Chicago’s offense. Rodgers took his team down on a 12-play, 80-yard touchdown drive after the interception.

Then, Green Bay scored a field goal after that. And taking away the kneel down before the end of the first half, the Packers scored a touchdown on their opening drive in the third quarter. Essentially three-straight scoring drives while the Bears watched the game tilt in Green Bay’s favor.

The Bears did end up going on an 80-yard touchdown drive of their own midway through the fourth quarter. Fields found Darnell Mooney wide open in the end zone to make it a 17-14 game, but the Bears couldn’t score after that.

Fields was asked after the game what he can take away from the matchup with Rodgers.

He can’t take down a supervillain like Rodgers alone. And until he leaves the division, Rodgers — or Thanos — has the NFC North firmly in his grasp.